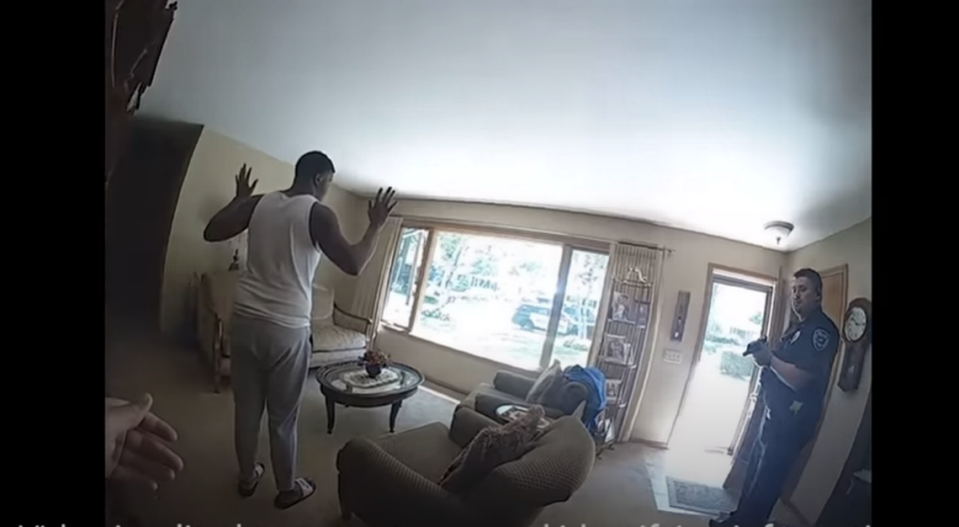 A Black man is suing two Wisconsin police officers after he was mistaken for a burglar and handcuffed in his home, according to a lawsuit filed this week.

Keonte Furdge had been living with a friend in Monona and on June 2, Monona Police Department officers Jared Wedig and Luke Wunsch pointed their guns and went inside the home without knocking or getting permission, according to the lawsuit filed on Monday. Furdge was handcuffed and released when officers realized it was a “misunderstanding,” the suit said.

Furdge is suing the city of Monona and officers Wedig and Wunsch, alleging unlawful entry, false arrest, excessive force, and failure to intervene.

A neighbor had called 911 and said it was “suspicious” when she saw an “African American wearing sweatpants, flip flops and a white shirt” sitting on the front steps of the home, the lawsuit read.

The neighbor told the police that the former owner of the house died and the house had been empty, according to a police department news release. She “did identify the individual sitting in front of the home as African American, however that was not conveyed to the responding officers.”

According to the police release, the officers announced their presence and knocked on the door before entering, but the lawsuit said they didn’t ring the doorbell or knock. They didn’t have a search warrant, according to the suit.

Furdge was handcuffed by Wedig and was told he was being detained because he “did not live here, that the person who previously lived here passed away, and the person who called the police was concerned that the house got broken into.”

The officers released Furdge when they spoke to the neighbor and said it “was a misunderstanding,” the lawsuit said. According to the police release, they contacted the homeowner’s son, who said he knew Furdge.

Wunsch told Furdge that he and his friend “are both big black guys, so, neighbors over here can be...,” according to the lawsuit.

“I understand they have their protocol and they have to keep everyone safe, but that doesn’t necessarily mean that their protocols are appropriate. And I think that that situation wasn’t handled appropriately … It could have easily led to another death of an unarmed black man,” Toren Young, Furdge’s friend, told Madison365.

Furdge said in the lawsuit that he experienced “bodily injury, pain, suffering, mental distress, humiliation, loss of liberty, and has incurred expenses” as a result of the incident.

The city of Monona issued an apology on June 3, writing on the police department’s Facebook:

“We sincerely apologize for the distress this situation caused the resident, and we take it seriously. We cannot begin to understand the frustration caused by this situation but know that it is our responsibility as elected officials to put in the work to do so.”

Re: [NON-BUSINESS] Black man sues cops after being mistaken for burglar at his Wisconsin home

Hope he wins a big settlement that was not a nice way to treat the man,

Re: [NON-BUSINESS] Black man sues cops after being mistaken for burglar at his Wisconsin home